In the early 1990s, the speculation boom brought lots of new customers into comic shops. Some professionals in the industry though it might be a good time to create new universes to draw these new readers in, and some used purchased licenses to build those universes around.

Valiant was one of those companies. Structured around purchased Silver Age Gold Key characters Solar, Man of the Atom and Magnus, Robot Fighter, Jim Shooter directed the construction of a universe complete with new characters, brought in creators like Barry Windsor-Smith and Dave Lapham, and engage readers on a level not seen in years. Valiant seemed like it might survive the eventual bursting of the speculation bubble, but alas, it was not to be.

However, for one bright, shining moment it looked very spectacular. Unity arrived at just that moment, when Valiant tried to ultimate gimmick in getting new readers to try out their new crossover, They gave it away for free. 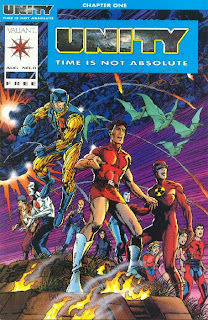 Above Chicago, Illinois a naked Erica Pierce falls from the sky, unhurt and exhibiting strange powers. Months later, Solar and the Geomancer Geoff are investigating her death. Solar explains that Erica gained similar powers to him in the same nuclear accident. He assumes that she was physically abused by her husband and killed him, then herself. The inanimate objects in the house tell Geoff that Erica was killed by another Erica Pierce, who then kidnapped Erica’s son. Geoff deduces that this Erica Pierce is the fabled demon that will destroy everything.

Solar takes Geoff to a lost land that has both dinosaurs and future technology. Almost immediately attacked by robots, some disguised as dinosaurs, Solar decides to send Geoff back for his own safety. Geoff insists on bringing back help from Gilad, the Eternal Warrior. Using Solar’s detached hand, Geoff returns to Earth.

Unable to reach Gilad on a pay phone, Geoff wills Solar’s hand to find other people that can help, returning later that night with the Harbinger renegades and Aric, possessor of the alien X-O Manowar armor. The pay phone rings and using Solar’s hand, Geoff teleports Gilad to his location. Gilad then uses the hand to recruit his brother Aram and his young companion, Archer.

With help recruited, Geoff and the others return to the lost land, where Solar has met up with Magnus, Rai and a future Gilad. Witnessing this from afar, Erica Pierce and the dead Erica’s son Albert send a massive force against the heroes in the first step she must take towards Unity.

Jim Shooter started crafting a true crossover in the style of Secret Wars. He makes good use of a hero that has almost limitless power and gives us a villain with the same level of power but with none of the moral restraint, who just may be insane. The story doesn’t quite give us a sense of how crazy and depraved she becomes in pursuit of that goal, saving it for some of the crossover comics to explain. That is the flaw in this issue, but also the strength in it as the first chapter of a larger story. You’ll most likely be inclined to read the rest of the story after reading this comic.

The art by Barry Windsor-Smith is outstanding. However, this comic was colored at the beginning of the computer color separations phase, so not much modelling is done with his forms. That’s for the best, because Barry Windsor-Smith art needs to be the focal point, and by adding a ton of variance in a pair of pants takes doesn’t add anything to great art. I will not allow many other artists that leeway, since their art usually benefits from a good colorist.

Unity has been collected, but those collections are out of print. In back issue bins, you should be able to find copies at a very reasonable price. The other chapters in the crossover might be harder to find reasonably, if you find them at all. Collecting the entire story might take a while.

The art is great, but gets hurt a couple of times by the mundane nature of some scenes. The story is very quick paced, but it seems that we miss a huge chunk in the middle while Geoff is fetching the Harbinger kids and X-O Manowar. All in all, though, this is the way to build a cohesive universe with a single crossover. It’s quite possibly, one of my favorite company-wide crossovers, and I have a tendency to hate them.