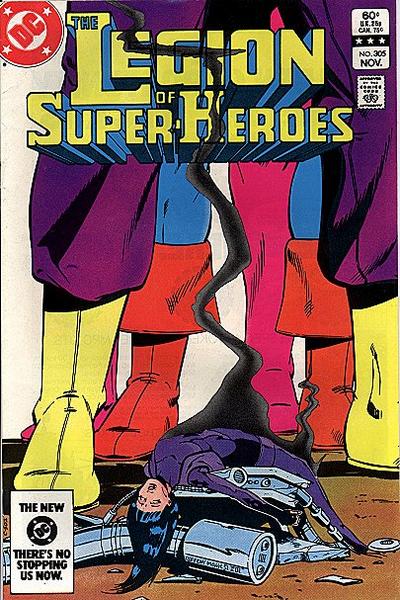 NOTE: This is a update of one of my reviews of old comics from a blogger account I set up some time ago. I’m reposting it here to make for a continuation of Legion comics reviewed in order.

This issue wasn’t my first issue of Legion that I bought, but it’s the one that has stuck with me. I’ve given copies to friends and had the pleasure to tell Paul Levitz how much I liked it when I got him to sign it.

A spaceship arrives in orbit around the planet Imsk, which a convenient caption tells us that its inhabitants have the ability to shrink and it’s threatened repeatedly to secede from the United Planets. Brainiac 5, Chameleon Boy and Element Lad summon Colossal Boy and Shrinking Violet (who is from Insk) to the bridge and reveal that their mission was a ruse as they ambush the pair and spray Violet with a chemical that cancels the shape-changing power of Durlans. It shouldn’t affect Violet since she isn’t a Durlan, but she tearfully admits that she is a Durlan, and therefore not Shrinking Violet.

Back at Legion HQ on Earth, Wildfire is sparring, rather roughly and effectively with three other male Legionnaires, while Phantom Girl and Shadow Lass trade catty comments about Wildfire’s failed relationship with Dawnstar and team leader Dream Girl’s relationship with Star Boy, right to his face.

We return to Imsk where Brainiac 5 is using a “psych-probe” on the sedated fake Violet reveals that she is a Durlan actress named Yera who was hired to impersonate Violet by three Imskians who claimed that Violet was with them while she was sick. She took the job to prove that she’s a real actress with talents beyond shapeshifting. Element Lad tries to apologize to Colossal Boy afterwards, saying that they felt it was necessary to keep him in the dark as to not tip off Yera. Colossal Boy understands, but still pops Element Lad in the nose for making him “the last to know.”

Elsewhere, on a planet that looks medieval, a man with long flowing red hair brushes by an old man into a village which he promptly destroys with a flash of fire and heat, just as a warning of who he represents.

On Imsk, Shrinking Violet is visiting the populace as a returning hero, and is secretly approached by an Imskian woman named Marlu who chastises Yera for coming to Imsk, and takes her to meet the others through a series of tubes that the Legionnaires and Science Police can’t follow. Marlu takes Yera to Liberation Headquarters, which looks to be better organized than anyone suspected. They capture Yera and take her to the three men that hired her who then reveal that the real Shrinking Violet has been kidnapped and tortured to steal Legion and United Planets secrets from her brain.

Cut to Starhaven, near the galactic core, Dawnstar takes part in a private ceremony to start her search for a soul-mate and flies off, crying over having to lose Wildfire’s love.

Back on Imsk what we thought was Yera turns out to be Chameleon Boy who breaks free of the restraints and leads the Legion to the Liberation Headquarters, where they make short work of the separatists, thanks to Colossal Boy’s rage and Brainiac neutralizing the leaders’ size changing powers to capture them. The Science Police mop up and take the rescued and medically critical Shrinking Violet away for months of recovery.

In an epilogue, Colossal Boy confronts a recovering Yera and realizes that he fell in love with Yera, not Violet, and decides to honor and continue their marriage.

The inking is really great on this, with Kurt Schaffenberger providing a different inking style that really accentuates the mood of the various scenes, especially the artificial feel of the Legion cruiser, and the moodiness of the bowels of the Liberation Headquarters. His use of Duoshading was really well-done, although at the time, when comparing against other mainstream comics of the time, probably looked a little distracting at the time.

The story is excellent, with Paul Levitz really able to highlight Colossal Boy emotionally in a way that I can’t recall any subsequent writer being able to pull off. He appears as a real person here, although the ending is a bit convenient, as he very easily accepts Yera for who she is. His writing of Shadow Lass and Phantom Girl really made me despise them as being the equivalent of the popular girls in school who are real bitchy just because they can be. The fact that these two relatively weak powered heroes are dating the most powerful guys on the team just adds to that characterization.

Penciller Keith Giffen was known during his run for setting a definitive look to the 31st century, and this issue doesn’t disappoint in that aspect. He renders a world whose inhabitants can shrink as believably as any major motion picture. At this point, Keith Giffen’s art style had yet to evolve into the style that came from his emulation of Jose Munoz, and his artwork is very reminiscent of Wally Wood here, but with more attention to detail, as this was the era at DC of George Perez, which permeated a lot of art at that time. It works really well here. I might even put this as the naturalistic high point of his Legion run.

This issue has been collected in Legion of Super-Heroes: The Curse (ISBN #1401230989). However, at this point, Legion was a very well-selling title for DC and it should be easy to find at a large convention or a shop with an extensive back-issue collection that isn’t flooded with 90’s glut comics. It should be available for very little cash. Comicspriceguide.com has this listed for $3.00, but I wouldn’t be at all surprised to find it in dollar bins or cheaper.

NOTE: I have revised the rating after re-reading the issue to post here. I would still buy multiple copies of this to give away to friends if I ever find them for real cheap ever again. It gets my highest rating and there are very few that will ever get that.