I’ve been reading comics for a long time, so I remember when comics were something you waited for and every week you were surprised. I remember when you trekked to the convenience store, or drug store, or grocery store, where ever you bought comics because there was no store that conveniently pulled your comics for you every week. I remember the one time a year you went to the closest comic book convention to you to get the issues that you missed because the other kids in town got there before you.

This is the ongoing story of recapturing that feeling by reading some comics that haven’t been cracked in some time. Perhaps they live in some long-neglected long box in your spare room. Perhaps they are discovered at the bottom of that last box you haven’t unpacked since your last move two years ago, and perhaps they’re just waiting in some comic shops back stock waiting for you to discover them the next time they drag them to some mini-convention in a hotel ballroom looking to score some quick cash with cheap back issues. Sometimes they’ll be gems, sometimes the memory is fonder than the reality, but my goal is to share with you my spoiler-ridden reviews of old comics. 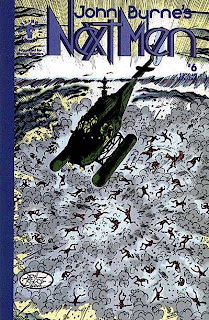 John Byrne was one of my earliest influences. In the 1990s, after bouncing between Marvel and DC over a decade, he turned a proposal for Marvel’s 2099 line into 2112, a graphic novel that became the basis for Next Men. This was the issue that tied those two together, because after reading 2112 and the first six issues (there was a Next Men #0) of John Byrne’s Next Men, it was not apparent that they were linked in any way except that both had a character named Sathanas, which could or could not be the same character. They certainly didn’t look alike. Enter this issue.

In an Antarctic research station, an earthquake rocks four scientists who quickly deduce it came from an explosion  30 miles away. They go to investigate to discover at the site, around a hundred mangled, mutilated and not quite human bodies. One of them is alive and it quickly attacks the group draining their life-force to save itself. Recognizing one of the scientists as Fleming Jorgenson, the creature, horribly injured relishes in that the year is 1955.

Cut to the States and the home of Congressman Aldus Hilltop who his hosting Dr. Jorgenson who’s returned from an apparent explosion of the research station that killed all other scientists there. Jorgenson is bringing Aldus Hilltop who places his political career above all else. Jorgenson has Hilltop help retrieve a case  from Antarctica in the most confusing and complicated way possible. Inside the case, is the creature he discovered in Antarctica, named Sathanas, an energy vampire that awakes and brings Hilltop into his grand plan with the promise of power.

Hilltop starts a program with Jorgensen and all the while providing Sathanas with young women to feed off of, including Hilltop’s own young wife, although they are all undetected because their corpses resemble old women after Sathanas feeds. The program buys infants from teen mothers to mutate into deadly powerful soldiers. Jorgensen disagrees with the military direction of the project that he and Hilltop have directed under Sathanas’s instructions and information using historical knowledge to shepherd the project around the chaos of many historical administrations. When Jorgensen makes a veiled threat to give the secrets to another government, he dies in a car accident, that Hilltop amazingly had nothing to do with.

The subconscious education network the test subjects are hooked to has developed a “feedback” that has the subjects seemingly talking to each other and living in an imaginary reality all the while training for a life as soldiers. When asked about it Sathanas confesses that not only will the project produce soldiers, but that they will be well educated and well rounded. He assures Hilltop that in twenty years, the project will succeed and eventually Hilltop will be President of the United States, confessing that what Hilltop thinks is the future is all in the past for Sathanas.

I chose this issue because it is the only one of this series to stand alone. One of the challenges of this series was that John Byrne was telling a larger story. However this story does give a reader a complete sense of the level of villains the Next Men actually face in their story. Sathanas is a patient schemer, willing to sit behind the scenes for the larger plan to unfold. Hilltop is so centered in his own self-interests that his methods can only be described as Machiavellian. At one point, he exhibits racial prejudice, which is just one extra  thing that really wasn’t needed to establish Hilltop’s evil nature. He has already fed at least two wives/lovers to Sathanas, and manipulated a eugenics program that would make the Nazis envious. Later in the series, Byrne would add other elements to Hilltop’s evil nature, but there is enough here to let the reader know that Aldus Hilltop does not have a redeemable bone in his body. If there is one fault to the story, it covers so large a span of time it does seem a bit jumpy.

John Byrne’s art is at times almost sketchy and betrayed by the colors from a more primitive computerized coloring process. One cannot fault the craftsmanship in Byrne’s ability to repeatedly draw the same character over and over, making them instantly recognizable even though they age by decades. Aldus Hilltop by the end of the book is the same Aldus Hilltop from the beginning , but with all the attributes that come with age. Byrne’s layouts are never confusing and even using relatively large panels, manages to tell a lot of story here. John Byrne’s art style may not be your cup of tea, but on the merits of craftsmanship, you cannot fault him.

This issue has been collected in the trade paperbacks published by Dark Horse and without fail, if I am ever in a city with several decent comic shops, I can locate a copy . IDW also published a Next Men Omnibus that reprinted this in a larger format. As an individual back issue, the 1990s had print runs on even the most marginal of books that were larger than today’s average print run of X-Men. Do not be surprised if you can pick up a copy of this in a bargain bin.