Reviews of Old Comics: Hansi, The Girl Who Loved The Swastika

Hansi, the Girl Who Loved The Swastika 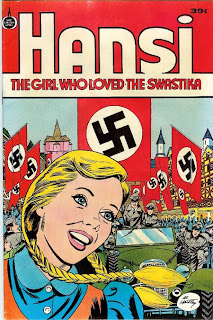 The trick in talking about Religiously-themed comics is doing so without inserting my own feelings about said religion into the commentary. Hansi was published in 1976 by Spire Christian Comics, who also produced a series of Christian-themed comics featuring Archie. It is the biographical story of Maria Anne Hirschmann. Hansi is actually an anagram for her ministry, meaning Helping America to a New Spirit and Insight. So yes, this comic is primarily propaganda for her ministry. Oh well, I didn’t know that until just now, so at least it isn’t obvious propaganda.

Hansi is a young girl living in the Sudetenland in 1938 when the Nazis invade and give her books to read, which she is thrilled about because before, she only had her mother’s Bible to read. She wins a contest to go to a Hitler Youth Training Camp, and says goodbye to her family and home.

In the camp, Hansi becomes completely enthralled in the message of the Third Reich, no matter what may happen to shake that belief. She also falls in love with a young German soldier named Rudy with whom she corresponds before meeting. He proposes marriage immediately, but his wealthy parents disapprove, so Hansi urges Rudy to forget her.

When the war takes a turn for the worse against the Germans, Hansi stands firm, even denouncing besieged soldiers pleas for Bibles to be sent to the front line. After Hitler commits suicide Hansi is taken to a Russian labor camp. Submitted to abuse at the hands of the soldiers, Hansi and many of the other girls escape into West Germany, where Americans are in control, but are slightly better with female prisoners. Hansi is suspicious but quickly realizes that the Americans are nowhere near the monsters that their Russian allies are. After giving her clean clothes, warm food and a place to rest, they take her to the Red Cross.

There she becomes a teacher and discovers that Rudi was thought dead in the war, but is alive after all, and still in love with Hansi. Unfortunately, after getting married, they find something missing in their marriage. Rudy brings home a bible and the two of them become good Christians and eventually immigrate to America. There Hansi sees a country that while very advanced, has lost any sense of purpose and reason. Hansi is inspired to open her home to troubled kids, introducing them to Christ, and thereby changing their lives. Her and Rudi broaden their ministry to prisons, always with success in fulfilling their purpose in life.

Again, the problem comes in not reviewing this with my own personal biases. It should be noted that as a product of its time, Hansi uses some broad strokes to paint groups of people. The Russians are portrayed as rapists (without directly referring to rape) and monsters. The Americans are all presented as Christians. Once in America, they meet no conflict, as Americans are just lost and awaiting ministry to introduce them to Christ.

The story is very brief in parts, which is part of the problem of telling a life story in just over 30 pages.  The plot is consistent from beginning to end, and to the credit, Hansi is a flawed person who only becomes idealized by her salvation, which she refuses numerous times. I appreciate the character’s growth, although I don’t believe for a second it went exactly like this, as they never really meet with resistance to their ministry.

As for the art by Al Hartley, it’s basic, but consistent. It’s really too bright in the places where the story is dark. The artist doesn’t take the opportunity to depict Hansi as very skinny, despite the story clearly stating it, and the refugee’s clothes are not depicted as dirty or damaged. Throughout the story, Hansi’s appearance changes very little, despite the passage of at least twenty years. There are moments where Hartley takes the opportunity to use page layout to his advantage, and makes use of some good illustrative techniques to convey many things at once.

It still could be much better, but this book isn’t about creating a good comic, but drawing attention to the HANSI ministry. Over time, it’s lost that appeal and become a joke among comic fans, although not as badly as Chick tracts. What’s sad is that the comic actually has a purpose and does it quite well, but as a comic, it falls into mediocrity.

This comic has not been collected to the best of my knowledge. Finding a copy will be very difficult, and could be expensive, depending upon the condition. However, you can read it online for free, thanks to someone that has uploaded almost all of the Spire Christian Comics in pdf format.