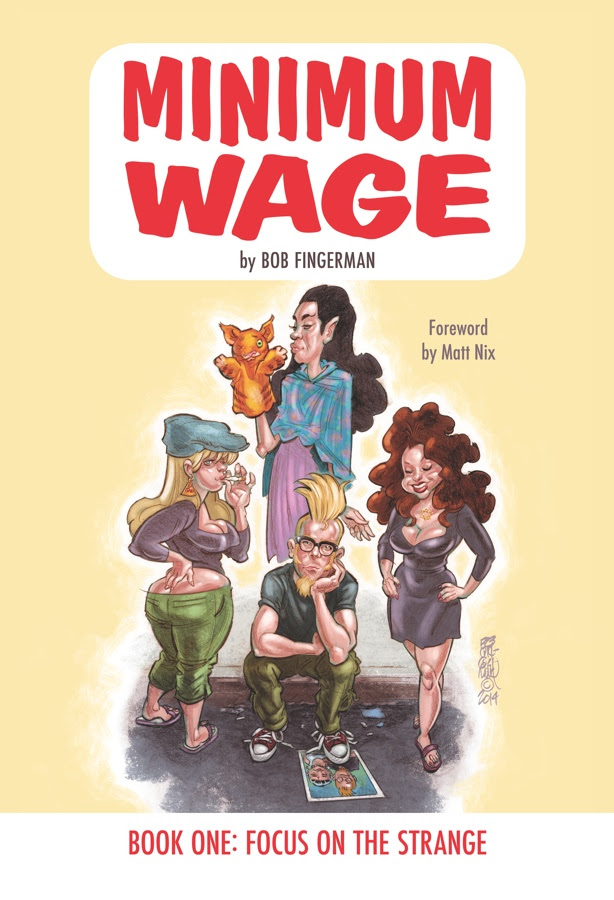 Here at Needless Essentials, we highlighted this series when it began and now, for those of you that didn’t or weren’t able to pick it up as it came out, Image is releasing the first story arc in a collected format! Image Comics released a massive press release about this series complete with some preview pages to reel you in!

After a nearly 15-year hiatus, Bob Fingerman’s edgy, critically-acclaimed series MINIMUM WAGE has returned! The place: Brooklyn, before it was a hipster Mecca. The protagonist: Rob, a 25-year-old, recently divorced cartoonist. The problem: How the hell do you get back on the dating horse when you’ve split from the woman you thought was the love of your life, moved back in with your mom, and you — gasp! — are trading in your indie cred to draw superheroes for a living?

Rob goes for broke in the Image Comics graphic novel MINIMUM WAGE VOLUME ONE: FOCUS ON THE STRANGE, in stores in October.

The slice-of-life, Eisner Award-nominated alternative comics darling returned to shelves in 2013 with MAXIMUM MINIMUM WAGE — a deluxe hardcover edition of the title’s original run, featuring brand-new material. It was drawing MINIMUM WAGE once again that inspired Fingerman to revive the title.

“My creative juices are fully rejuvenated after putting together the deluxe Maximum Minimum Wage collection last year,” said Fingerman, “so I’ve never been more excited to be back in the harness, putting Rob and the gang through their paces.”

MINIMUM WAGE VOLUME ONE: FOCUS ON THE STRANGE will be in comic book stores on October 8 and in bookstores on October 21. It is available for pre-order now. The book will debut at the Alternative Press Expo (APE) in San Francisco onOctober 4 and 5. Fingerman is a special guest of the convention.

MINIMUM WAGE VOLUME ONE: FOCUS ON THE STRANGE by Bob Fingerman

“Minimum Wage #1 proves that Bob Fingerman is nowhere near short on stories to tell. Rather, it’s proof positive that he’s more willing to be emotionally raw and honest than ever, while never losing sight of the essential comedy of life. It’s early in 2014, but Minimum Wage looks like it’s well on its way to being one of the sharpest looks at the human struggle that mainstream comics will produce this year. Not bad for a comic that seeded its roots in the very specific ’90s landscape of Indie Comics. It’s more relevant and personal than ever.” –Vince Ostrowski, Multiversity Comics

“I had no doubt that Minimum Wage would be a triumphant return…, but I’m still blown away by the quality and craftsmanship. Whether you read the original series or not, you’ll fall right into step with this story. Pick it up and don’t put it down.” –Hannah Means Shannon, Bleeding Cool

“Fingerman has outdone himself. This book is raw, alternately hilarious and depressing, hopeful and forlorn and most of all honest.” –Doc Benway, Go Collect

“Maximum Minimum Wage is a hefty tome from the cartoonist Bob Fingerman, who confesses in his introduction that this just might be the final version of this semi-autobiographical work. I’ve had a lot of ups and downs with Mr. Fingerman’s work.Maximum Minimum Wage is one of the ups. The characters are still flawed and I still wonder about some of their choices, but now, 10 years later, the story feels more grounded: I could see them as real people who make mistakes, sometimes big ones. The last page of the story, more than half way through before a ton of extras, left me feeling sympathetic for the main character who was riddled with doubt on one of the big days of his life.” –New York Times

“The cult ‘90s comic strip Minimum Wage, about a cartoonist and his pals, cuts as deep and as dark as Louie and Girls. Thankfully, it’s getting a new deluxe collection with a foreword from superfan and The Walking Dead creator Robert Kirkman.” –Entertainment Weekly’s “Must List”

“Minimum Wage is an important comic. If I were tasked with introducing someone to comics in an attempt to make them love and cherish the medium as much as I do, I’d give them Watchmen, Bone, Savage Dragon, and Minimum Wage. To me, those are the cornerstones of the foundation of what I read early on that firmly established my love of the comic book medium. In my opinion, those four books show you the wide range of what comics can offer.” –Robert Kirkman (THE WALKING DEAD), from his foreword

“The sweetly profane tale of a neurotic, sarcastic, artist trying to figure out the rest of his life. Not sure exactly how Bob Fingerman videotaped and wrote this book about me, but I’m here to tell him he got all the names wrong.” –Scott Aukerman, Comedy Bang Bang

“Intensely funny and addictive, Fingerman captures true love and Brooklyn with incredible honesty and tenderness. I always scream with joy when I see the newMinimum Wage at the bookstore, and now here’s the collected edition that we can all scream for.” –Margaret Cho

“Fingerman’s comics are all about the sloppiness and failure and noise and triumphs and quiet and joy and sadness that arrive completely off-schedule in a day, or in a life. Plus, he draws cute chicks.” –Patton Oswalt 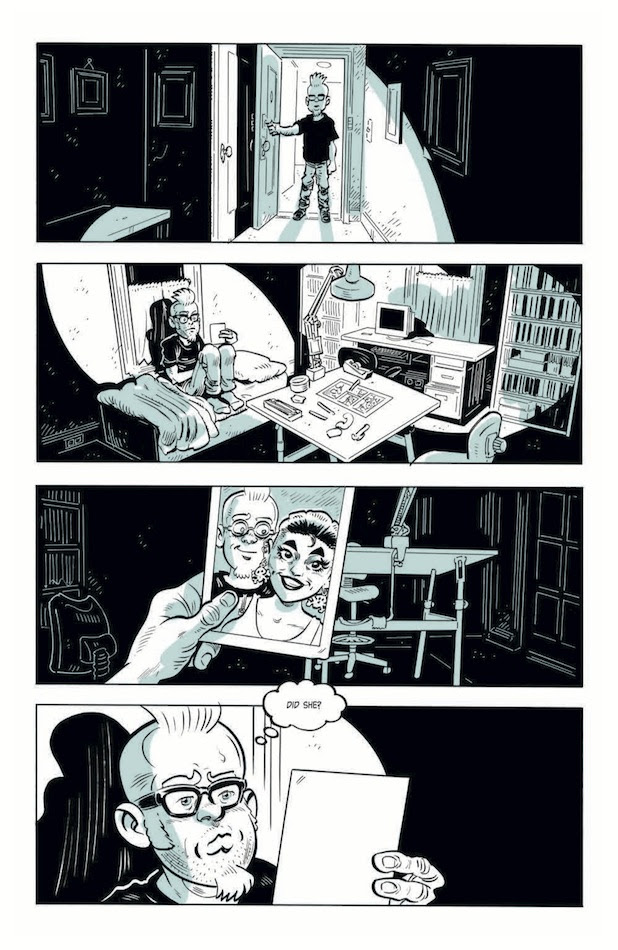 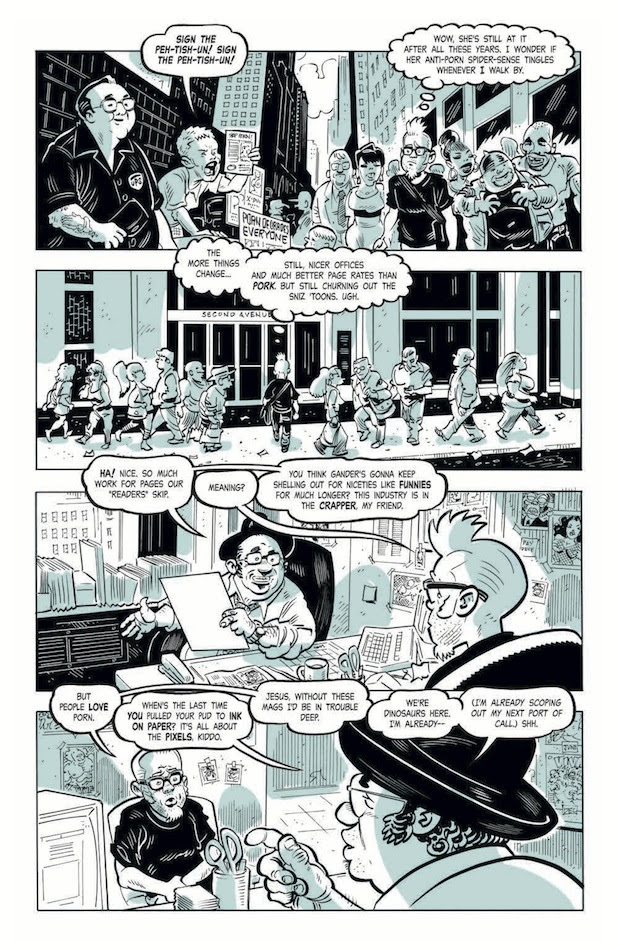