JEM AND THE HOLOGRAMS Get A Comic Book Series From IDW!

IDW has released a press release concerning a new Jem and The Holograms comic series. I am sure many of you (including myself) caught an episode or two back in the 80’s so these gals need no introduction. Read on for the press release and lets get ready to get outrageous!
San Diego, CA (December 2, 2014) – IDW Publishing is excited to expand its long relationship with Hasbro and welcome JEM AND THE HOLOGRAMS to the world of comic books. Starting in March 2015, Jem and company will star in their first ongoing series! The creative team bringing this world full of fashion, art, action, and style to life is writer Kelly Thompson (Storykiller, The Girl Who Would Be King) and artist Ross Campbell (Glory, Teenage Mutant Ninja Turtles), with subscription covers by Sara Richard (My Little Pony, Kitty and Dino). 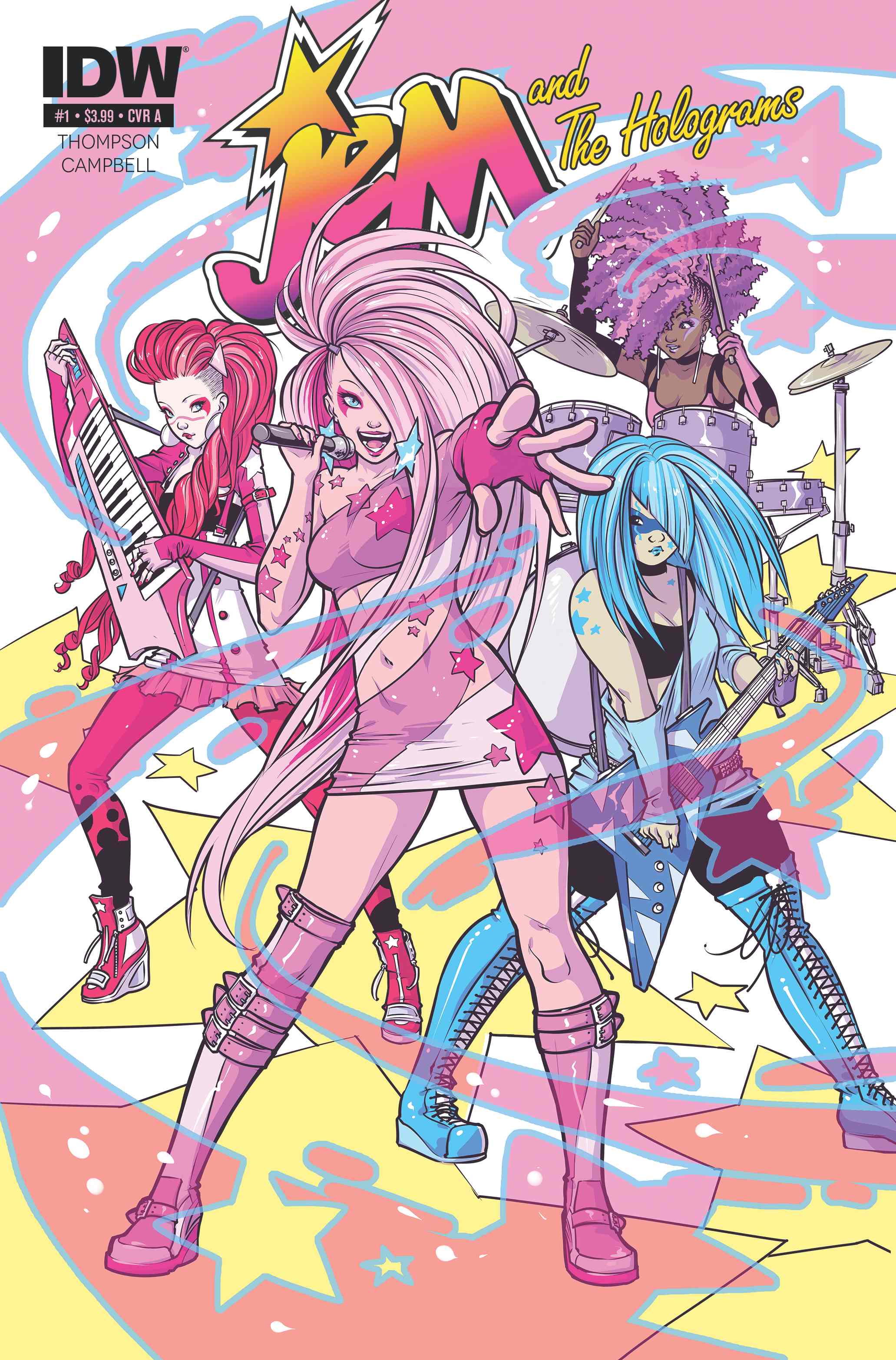 It’s the 21st century, and Jem and The Holograms are 21st century girls! Meet Jerrica Benton, the gifted singer of The Holograms, a band that has the right look and the right sound… But one thing is holding them back—Jerrica’s crippling stage fright. Luckily, Jerrica is about to find help in the most unlikely of places when she discovers a forgotten present left by her father. And what she finds is truly outrageous!

“As a kid I was a huge fan of the original 80’s JEM AND THE HOLOGRAMS cartoon and so the chance to breathe new life into it for a savvy modern audience, not to mention to work with Ross, an artist practically destined to draw this book, is really a dream come true,” said series writer, Kelly Thompson.

Don’t miss the chance to get the five stunning rainbow foil covers that will be available for Issue One—one for each Hologram by artist Amy Mebberson (My Little Pony, Pocket Princesses), plus the whole band by series artist Ross Campbell—in a deluxe rainbow foil and hologram collectible box. A second box set for Issue two will feature another set of four covers by Mebberson and a group shot by Campbell—this time starring Jem’s greatest nemeses, The Misfits!

“Getting a JEM AND THE HOLOGRAMS comic going was a top priority for me when I started at IDW,” says Senior Editor John Barber. “It took three years, but Kelly and Ross came in with a style and attitude that really got Jem. They understand Jem’s appeal—I can’t overstate the impact Jem has had on generations of fans and readers.”

The beloved animated show JEM AND THE HOLOGRAMS debuted on television in 1985, alongside a very successful toyline by Hasbro. The show was geared towards young females but was unlike any “girls show” before as it featured a strong female lead and mixed elements of science fiction, adventure, and romance.

Hasbro announced earlier this year that a live-action, motion-picture adaptation of JEM AND THE HOLOGRAMS from Universal Pictures starring Aubrey Peeples and directed by Jon M. Chu is slated for release October 2015.

About Hasbro
Hasbro, Inc. (NASDAQ: HAS) is a branded play company dedicated to fulfilling the fundamental need for play for children and families through the creative expression of the Company’s world class brand portfolio, including TRANSFORMERS, MONOPOLY, PLAY-DOH, MY LITTLE PONY, MAGIC: THE GATHERING, NERF and LITTLEST PET SHOP. From toys and games, to television programming, motion pictures, digital gaming and a comprehensive licensing program, Hasbro strives to delight its global customers with innovative play and entertainment experiences, in a variety of forms and formats, anytime and anywhere.  The Company’s Hasbro Studios is responsible for entertainment brand-driven storytelling around Hasbro brands across television, film, commercial productions and short-form.  Through the company’s deep commitment to corporate social responsibility, including philanthropy, Hasbro is helping to build a safe and sustainable world for future generations and to positively impact the lives of millions of children and families every year. It has been recognized for its efforts by being named one of the “World’s Most Ethical Companies” and is ranked as one of Corporate Responsibility Magazine’s “100 Best Corporate Citizens.” Learn more at www.hasbro.com and follow us on Twitter

About IDW Publishing
IDW is an award-winning publisher of comic books, graphic novels and trade paperbacks, based in San Diego, California. Renowned for its diverse catalog of licensed and independent titles, IDW publishes some of the most successful and popular titles in the industry, including: Hasbro’s The TRANSFORMERS, G.I. JOE and MY LITTLE PONY; Paramount’s Star Trek; Nickelodeon’s Teenage Mutant Ninja Turtles; 2000AD’s Judge Dredd; The Rocketeer; Toho’s Godzilla; Wizards of the Coast’s Magic: The Gathering and Dungeons & Dragons; V-Wars from New York Times best-selling author Jonathan Maberry; Ragnarök from Eisner Award-winner Walter Simonson; Winterworld, created by Chuck Dixon and Jorge Zaffino; and Little Nemo from the award-winning duo of Eric Shanower and Gabriel Rodriguez. IDW is also home to the Library of American Comics imprint, which publishes classic comic reprints, Yoe! Books, a partnership with Yoe! Studio, and the multiple award-winning Artist’s Edition imprint.

IDW’s critically- and fan-acclaimed series are continually moving into new mediums. Currently, Jerry Bruckheimer Films and Disney are creating a feature film based on World War Robot; Dwayne “The Rock” Johnson and Warner Brothers are producing a film based on Ashley Wood’s Lore; Michael Bay‘s Platinum Dunes and Sony are bringing Zombies vs. Robots to film, Kurtzman/Orci are producing a movie based on Locke & Key at Universal.